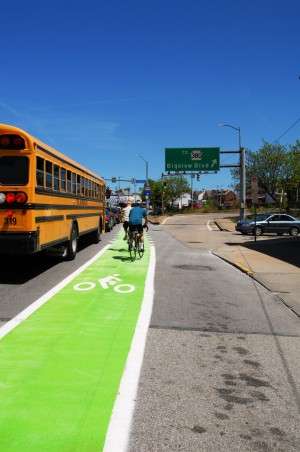 Pittsburgh’s Department of City Planning is in the process of installing 500 bikes at 50 bike share stations throughout the City. Each station will hold a dozen sturdy bikes, require only two parking spots, and provide residents and visitors with safe, low-cost transportation. Once installed, the stations will be maintained by Pittsburgh Bike Share, which operates the Pittsburgh’ Healthy Ride bike-sharing system which is designed to to increase public transportation options in the city.

Three stations will be situated along Liberty Avenue, with proposed locations near the intersections of Cedarville, Millvale, and Baum. The proposed sites are now being questioned. In response, the Department of City Planning is reviewing the currently proposed locations and evaluating potential new locations.

To show their support of the bike share stations in their current proposed locations, more than 50 residents and business owners attended the April 28th meeting of Bloomfield Livable Streets.

Let Mayor Peduto and City Council know your opinion on the proposed bike share locations. Email sally.stadelman@pittsburghpa.gov, the mayor’s point of contact on this issue, and Councilwoman Deb Gross via District7@pittsburghpa.gov.

For updates on this and other related issues, attend Bloomfield Livable Streets monthly meetings on the 4th Tuesday of every month at the East End Book Exchange, 4757 Liberty Avenue, 15224. Meetings begin at 6 pm.

I sent emails to Peduto and Deb Gross in support of the proposed bike share stations and reminded them that I am a Bloomfield resident and I vote.

I am getting a little tired of the NIMBY ones in our neighborhood who, just because they have lived here for many years, think that any change is bad. Of course we have to respect them and their views, but too long this neighborhood has been dominated by narrow minded residents who resist all change.