City honors Christina Howell for her work in Bloomfield 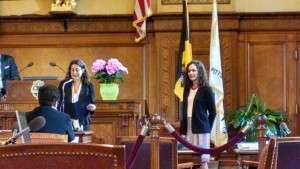 Presented by Bloomfield councilwoman, Deb Gross, the proclamation, thanked Howell for  “a decade of her impactful, inspiring, and selfless efforts to her neighborhood, as well as for her undeniable role in the implementation and success of the Bloomfield Saturday Market.”

The City Council further declared Saturday May 30th as Christina Howell Day in the City of Pittsburgh.

Howell, who has been a Bloomfield resident for nine years, has been active in the community since she moved to the neighborhood. Last year she was hired by the Bloomfield Development Corporation (BDC) to establish the Bloomfield Saturday Market and was named the BDC’s interim director last December.