A bright and sunny day greeted those attending the dedication of the Paul J. Sciullo II Memorial Park last month.

The ceremony, which took place on the park’s new dek hockey surface, was held in honor of Pittsburgh Police officer, Paul John Rizzo Domenic Sciullo II, a Bloomfield native and an ardent hockey fan who tragically lost his life in the line of duty.

Sciullo and two of his fellow officers; Stephen J. Mayhle and Eric Kelly, were killed on Saturday, April 4, 2009 while responding to a call about a domestic disturbance. 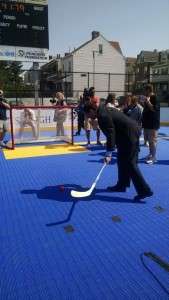 Pittsburgh Mayor Bill Peduto, who dedicated the park, was slated to play on an over-18 hockey team with the Sciullo, but never had the chance.

Although Officer Sciullo will never see the park that bears his name, his passion for the sport will live on in the state-of-the-art rink, as well as in the new playground, swimming pool and bocce ball court.

Planning and building the thoughtfully designed park took nearly five years and cost over $1 million. The rink has LED lighting and a surface that allows rainwater to seep through. In addition, the planners ensured that the park is accessible to people with disabilities.

The Paul J. Sciullo II Memorial Park is situated on Ewing Street at the site of the former Dean Field.