Even amidst the rubble, photos from the recent earthquake in Nepal are filled with color. Bright prayer flags that had flown from the tops of temples now dangle in the ruins. Female evacuees in vivid, multi-colored dress carry baggage and babies over dusty roads. And bodies shrouded in orange are lifted onto funeral pyres near the river.

So much color seems a startling juxtaposition to all the destruction, but it is also reflective of the richness of the culture—a culture that Nima Lama and his wife, Kunchok, both from Nepal, sought to support and share when they opened their shop, Kathmandu Artifacts in 2013.

By purchasing handmade goods directly from Nepalese craftsmen, rather than from factories churning out souvenirs, the Lamas have been providing fair economic returns to the artists who make the jewelry, clothing, and exquisitely crafted artwork they carry in their shop. Given that Nepal is the poorest country in South Asia and ranks as the twelfth poorest countries in the world, their support is of  real significance to these Nepalese artists and their families.  And by selling Nepalese goods in their Bloomfield shop, they also share their homeland’s rich artistic heritage with everyone who walks through the door.

Nima, a soft spoken man in his early forties, calmly answers questions about relatives in Nepal. Although he no longer has family there, his wife’s parents and her extended family are now living on the street in front of their home in Kathmandu, which was destroyed in the quake. Fortunately, his wife can speak on the phone to her parents nearly everyday. And for now, they have enough food and water. It is those living outside of Kathmandu, Nima explains, those living in difficult-to-reach villages, who are suffering the most.

A cell phone rings and Nima’s mother, a tiny woman with an apologetic smile, answers. Her conversation is animated, so Nima takes the opportunity to walk to the front of the store and explain the significance of the statuary and other ritual objects displayed throughout. He points out that that the Thangka suspended in his shop window is a silk wall-hanging that is traditionally decorated with a painting depicting a Buddhist deity, scene, or mandala. In this case, the Thangka is also embroidered with gold, and took an artist well over a month to produce.

On the wall above an elaborately carved case filled with casted statues of the Buddha, a wildly colorful line of masks punctuates the spare, white wall. Several are of the elephant-deity Ganesh, a Hindu Lord of success and destroyer of evils and obstacles. Ganesh, is also the god of education, knowledge, wisdom, and wealth. Given that the Lamas moved to the United States to secure a better education and future for their eight year-old son, Sangay, Ganesh’s presence in their shop seems particularly appropriate.

Hung at eye level is a Tibetan Buddhist prayer wheel on a spindle. Made of copper, and decorated with turquoise, coral and lapis, the wheel displays a mantra, and when turned by a supplicant, has an effect similar to the recitation of prayers.

The Lamas, along with the Nepalese Community of Greater Pittsburgh, are now turning their prayers toward those who are suffering in their homeland.

On June 7th the community is hosting a traditional Nepalese dinner to raise funds for rebuilding Golche, a village in the Himalayan Mountains north of Kathmandu.

The dinner, which will be held at Congregation Beth Shalom located at 5915 Beacon Street, will be served between 5 and 7 p.m. A minimum $20 donation per person is suggested. RSVP by June 1st to rebuildinggolche@gmail.com.

In addition to ritual objects, Kathmandu Artifacts carries a wide assortment of colorful Nepalese clothing, brightly decorated accessories including, bags, hats, and scarves, as well as a large selection of hand-made silver jewelry 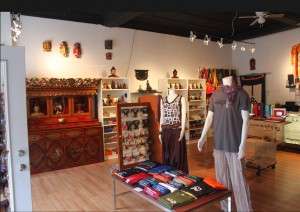 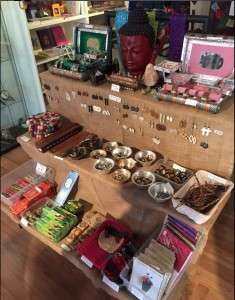